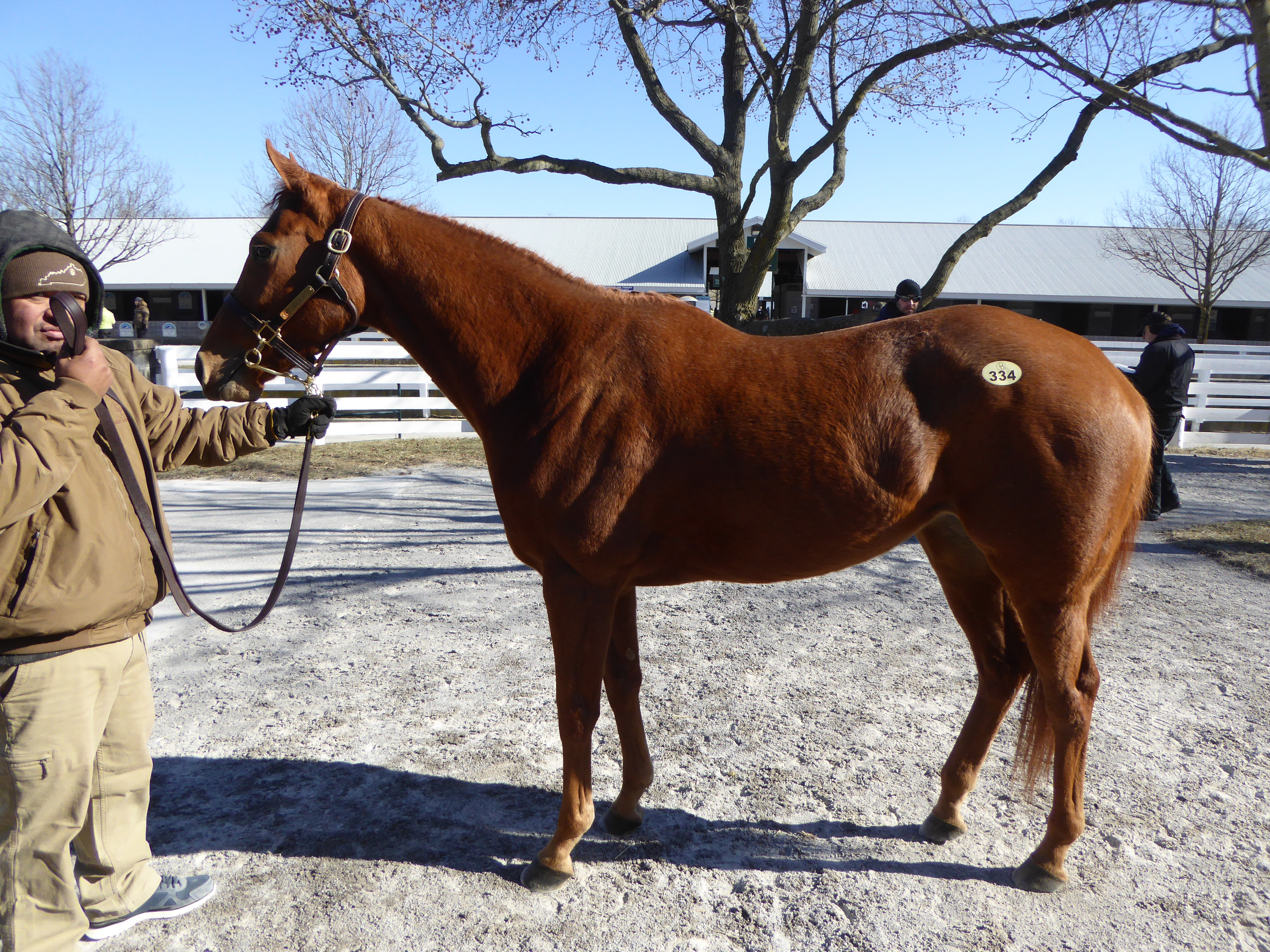 The bar went up once again on Monday at the Keeneland January horses of all ages sale, with bloodstock agent Steven Young going to $485,000 on stakes winner Bellavais for an unnamed client.

Young said the 4-year-old Tapit filly will remain in training, and will move from the barn of Jimmy Toner to Todd Pletcher.

Bellavais has won three of 11 starts for earnings of $199,210, highlighted by victories last year in the Ginger Brew Stakes at Gulfstream Park and the Drumtop Stakes at Suffolk Downs. She also finished in the money in the Wild Applause Stakes and Soaring Softly Stakes, both at Belmont Park.

Bellavais is out of the Grade 3-winning Ghostzapper mare La Cloche, whose two foals to race are both winners. She is one of the latest branches from a cornerstone Darby Dan family, reaching back to fifth dam Golden Trail, who was purchased by Darby Dan founder John Galbreath following the death of prominent breeder Isabelle Dodge Sloane in 1962. Second dam Memories of Silver is the pivot point for runners including Grade 1 winner Winter Memories.

Bellavais was the only foal the Darby Dan operation bred out of La Cloche before she was sold to Don Alberto Corp. for $2.4 million at the 2014 Keeneland November breeding stock sale. La Cloche was offered in foal to Tapit, and she produced a colt named Tap Fever who was later offered at the 2016 Keeneland September yearling sale, but finished under his reserve with a final bid of $475,000. Tap Fever has won one of two starts as a homebred for Don Alberto Stable and partners.

Here is what Young said after the fall of the hammer...

"She's from a family that you have to have a world of respect for, the Darby Dan mares. It's such an infrastructure of other horses in that pedigree that are doing well. She's a stakes-winner, she has to have a base value out there as a safety net that she'll never be worth less than. I thought she would be a good gamble to go ahead and run as a 4-year-old. That family gets a little better as it gets older, she's a multi-surface stakes horse, and I think she was an obvious pick.

"Obviously, we're very pleased. It's an old Darby Dan family. We'll sell a little bit of the gold sometimes, but not much of the goldmine. It's really more of a business decision. I'd have much preferred not to have sold her, because there's been quite a number of those fillies that have come out of that family that have been on the small side, which was her downside, but they've done well nonetheless. I'm not quite sure who the buyer is, Steve was coy about that, but I know that he buys only for people that really care and will do right by her, so I'm quite happy with that.

"I'm still going back to the next generation into Memories of Silver and Winter Memories. We have two other connections with that family as well. It goes back to the taproot family with Golden Trail, and it's our most dominant family."

On typically keeping a hold on products of the taproot Darby Dan family...

"It's kind of a crazy philosophy in that we're never going to get rich by it, but I've got the best seat in the house, and in life, that's what I enjoy. I enjoy participating and keeping the farm and the broodmares going. I'm probably not going to get rich with that philosophy, but it's a great life."