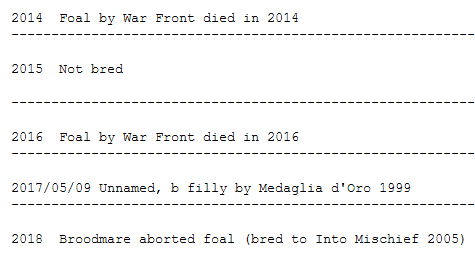 Hall of Fame racemare Zenyatta's run of bad luck as a broodmare continues as, according to Equineline, the mare aborted her pregnancy to the cover of successful sire Into Mischief and thus will not have a foal in 2018.

Since being retired in time for the 2011 breeding season, Zenyatta has had only two foals to survive to racing age thus far, neither a winner on the track. Her first foal, Cozmic One, by Bernardini, went unplaced in five starts. He is now training as a hunter-jumper, aiming for the 2018 Retired Racehorse Project Thoroughbred Makeover. In 2013, Zenyatta produced Ziconic, by leading sire Tapit. He currently sports a racing record of 12-0-2-6; he last raced on Feb. 9, and last had a published work on March 13.

Zenyatta produced a filly by War Front in 2014, and was not bred back for the following season. The filly suffered an injury that proved fatal in a paddock accident later that fall, after she was weaned. Zenyatta delivered a War Front colt in 2016, who aspirated meconium during delivery, and survived only a few days.

Zenyatta delivered a Medaglia d'Oro filly on May 9, 2017 before being bred back to Into Mischief. The filly, now a yearling, has been reported to be in good health. She is boarded at Lane's End, where Zenyatta also resides.